Webinar on Buddhist sites of Nepal 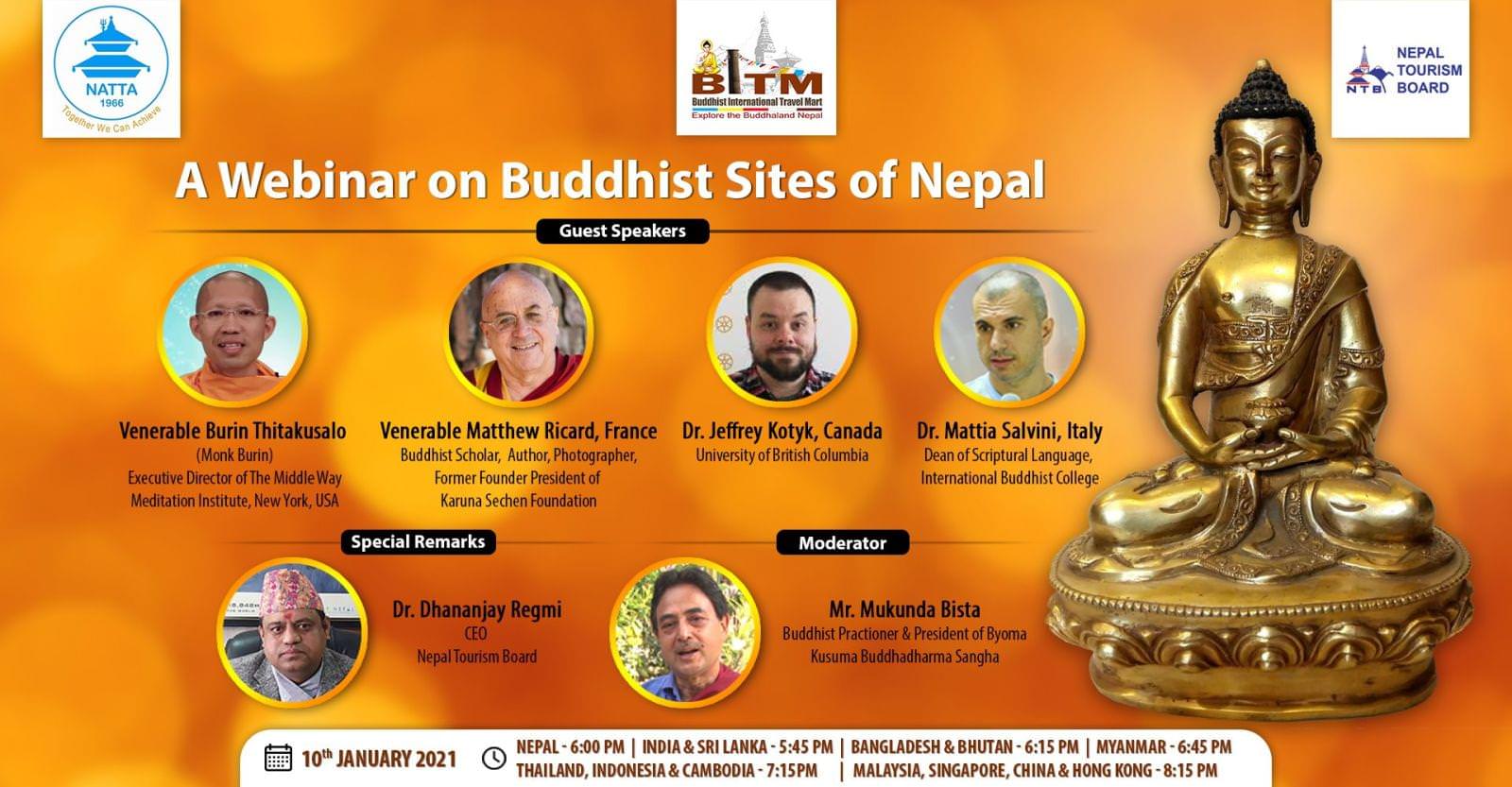 NATTA in close coordination with Nepal Tourism Board (NTB) organized a webinar on Nepal's Buddhist sites with the motto of ‘Following the Footsteps of Buddha for Universal Peace and Prosperity' on 10th January 2021 at Kathmandu.

Started with the Promo video covering the whole of the journey of our first edition of Buddhist International Travel Mart (BITM) 2019 and the special video of Goodwill Message shared by Venerable Metteya Sakyaputta, Vice Chairman, Lumbini Development Trust, the Webinar was officially inaugurated by lighting the lamp, by President of NATTA, Mr. Achyut Guragain at NATTA Secretariat. Mr. Guragain then continued with the Welcome Speech where he apprised about the Buddhist Circuits in Nepal and also assumed that the discussions shared on the Webinar shall help to reach a positive message to the number of people and aspire to visit Buddhist Sites of Nepal at least once in a lifetime.

A special remark was given by CEO of Nepal Tourism Board, Dr. Dhananjaya Regmi where he highlighted on the upcoming projects that greatly support the Buddhist Sites of Nepal and rise the tourism industry. A goodwill message was read out in the Webinar which was given by Mr. Bikram Pandey, Goodwill Ambassador of Lumbini Development Trust. The message highlighted on Buddhist Tourism and steps that can be taken to promote Buddhist Circuit Tourism.

The moderated discussion was moderated by Mr. Mukund Bista who is a Buddhist practitioner and President of Byoma Kusuma Buddhadharma Sangha founded by the Vidhydhara Acharya Mahayogi Sridhar Shamsher Rana. The speakers sequentially shared their insights on their given theme. In between the speakings' by Speakers, different Buddhist Sites and Buddhist cultures were presented and elucidated on their importance and connection of Buddha by Moderator Mr. Bista.

Venerable Ajahn Burin Thitakusalo (Monk Burin), Executive Director of The Middle Way Meditation Institute from New York, USA spoke on the topic ‘Lumbini the Fountain of World Peace.’ Monk Burin on his insights shared about the inspiration of Pancha Shila that inspires Buddhist or non-Buddhist people from the world to come to meditate, learn this dharma and pass on the value to the family, friends in any country. And not just from a book but to visit Nepal, Lumbini, Buddhist Sites and live a better life as the peace starts in Lumbini. Lumbini is the foundation of Peace.

Venerable Matthieu Ricard, Buddhist Scholar, Author, Photographer and Former founder President of Karuna Sechen Foundation from France spoked on the topic ‘The Sacred Places and Art as a Way to Cultivate Pure Perception.’ While giving his insights, he shared that there are many sacred places in Nepal from the place of Birth of Buddha to many special holy places of Buddha and those places help to cultivate pure perception. The positive temperament has been blooming in Nepal for centuries and centuries and it has supported cultivating this pure vision also in a form of the thanka, paintings of Buddha.

Dr. Jeffrey Kotyk, University of British Columbia from Canada spoke on ‘Medieval Chinese Interactions with Nepal.’ Dr. Jeffrey started his speaking with the interconnection of Nepal and China how the relation started blooming when Nepal send china a gift, a Bodhi tree. Giving the example of Chinese monks staying in Nepal to study Sanskrit and Buddhist scriptures, he emphasized that we can bring people from around the world not just for religious but also for academic experience and can be a leading place for education in the future. Also highlighting on the current and future developing infrastructural aspects of Nepal, Dr. Jeffrey assured of Nepal being accessible and affordable to Buddhist from any countries.

Dr. Mattia Salvini, Dean of Scriptural Language, International Buddhist College from Italy spoke on the topic ‘Nepal and Sanskrit Buddhism Revisiting in the Present-day Context.’ Starting the session enchanting with the Sanskrit Mantra, Dr. Mattia spoke about the importance of Manjushri, creation of Swoyambhu Stupa and the relation to Scriptural language. He stressed that all the historical monuments should have inscribed something highlighting the prayer or its importance both in original and translated format. Dr. Mattia invited people from around the world to learn the most common Buddhist languages, cultures.

All our speakers had their significant perspectives during the Webinar. The philosophical aspect of Buddha’s teachings shared during the Session also helped to showcase and publicize important Buddhist sites and Nepal's Buddhist tourism on the global platform.

The Webinar was ended with a Vote of Thanks by NATTA Senior Vice President and Coordinator for Webinar, Mr. Binay Basnet.

The program was compered by NATTA COO Ms. Shradha Chhetri.

Participated in by several countries from India, Bhutan, Canada, Europe, USA, UK, Bangladesh, Italy, France, Sri Lanka, Thailand and Malaysia and many more, over 200 people were joining us live online, and hundreds of audience watching us live from around the world in different platforms. The program was broadcasted live on Bodhi Television throughout our program and was also published live on NATTA Facebook page. Also, several participants publicized NATTA in their respected media.

Despite the tremendous potential of Buddhist tourism in Nepal, there lacks exposure. We believe the webinar also aimed to help our country's campaign of positioning Nepal as a gateway to the Buddhist Circuit. As the upcoming International Airport at Bhairahwa near Lumbini and the enhanced infrastructure around the precious sites of Lumbini and Buddhist circuit was also highlighted during the Webinar.

On January 10, 2021, Ministry for Culture, Tourism and Civil Aviation (MoCTCA) invited tourism related private stakeholders for the interactions at Singhadurbar.

On the interaction, tourism stakeholders shared their concerns and difficulties as the tourism sector has been suffering and been closed for almost a year due to pandemic. They demanded the government to prepare standards to facilitate the tourism sector and urged to make provisions for the revival of the tourism sector. Also, as tourists from other countries are not able to come immediately, entrepreneurs demanded to work on the promotion of domestic tourism.

President of NATTA, Mr. Achyut Guragain, taking a moment requested for the coordination with Ministries; Ministry of Health and Population, Ministry of Culture, Tourism and Civil Aviation, the Ministry of Foreign Affairs and the Ministry of Home Affairs regarding the foreign tourists who want to visit Nepal. Mr. Guragain also stressed on the non-requirement of quarantine to the tourists coming to Nepal following the health protocols.

Newly appointed Minister for Culture, Tourism and Civil Aviation, Mr. Bhanubhakta Dhakal, said that he will have a positive role to take the lead in fulfilling the entrepreneurs’ legitimate demands to the best of his ability and the state would do its utmost to resolve the problems of the tourism sector. He said that the policy should be discussed extensively and the opinion and advice of all stakeholders should be taken into consideration. 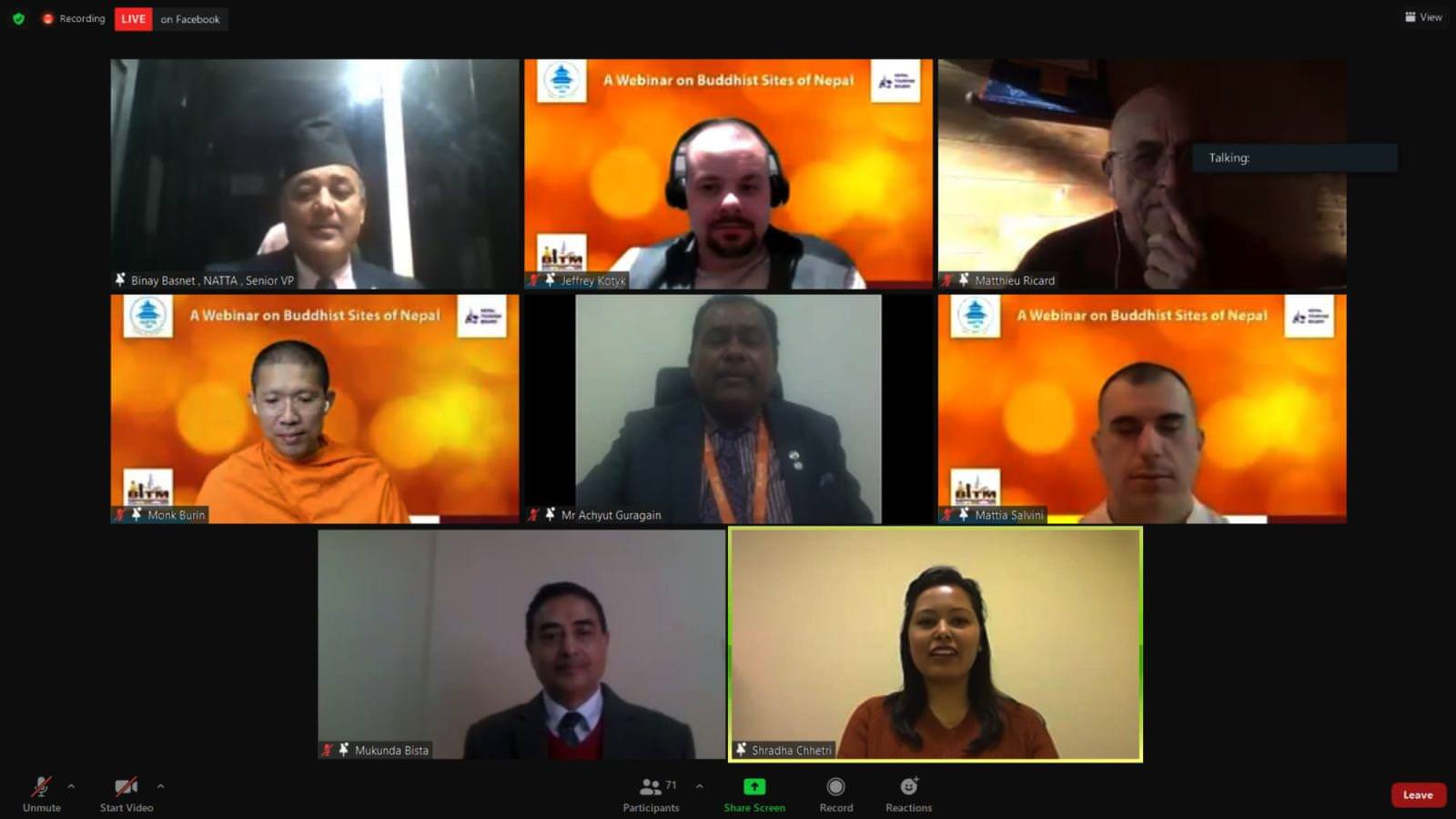